Real Estate is probably the most valuable investment in most households and any mistake can be costly.  We believe in consistently providing truthful and unbiased information to our clients for them to make informed decisions.

Causes for inflation, such as the Russia-Ukraine War, are persisting (see here for the effects of a prolonged war). Inflation is also rising globally. Following the first interest rate hike in March 2022, the US Federal Reserve (Fed) is poised to increase rates to 1.9% by end-2022, followed by 3 more hikes in 2023.

What is the impact of interest rate hikes?

Interest rate hikes are effective in reducing inflation, as borrowing and spending become more costly, thus reducing the amount of money chasing for goods and services. Reducing demand this way will bring down inflation, but it will also dampen economic growth. This increases the risk of the economy going into a recession, which is the dilemma policy makers are facing – of choosing between allowing inflation to continue rising or possibly hiking the interest rates into an economic recession.

In March 1980, the yearly inflation rate in the US peaked at 14.8%. In an unprecedented move, Paul Volcker, then Chairman of the Fed, led a series of interest rate hikes that led to a peak rate of 20%. This move was widely unpopular, as it sent the country into a recession. It was, however, effective in curbing inflation.

Given that inflation will have a severe impact on the spending power of the common man, it would be political suicide not to raise interest rates even though the Fed is concerned about the repercussions. It is no wonder why the incumbent US Fed Chairman, Jerome Powell, would reference Paul Volcker, that Volcker “knew that in order to tame inflation and heal the economy, he had to stay the course.”

Is a recession imminent?

While the Fed has set its course to tackle inflation at the risk of “creating” a recession, recession could still be avoided should the initial interest rate hikes prove effective and no further hikes are required. There could also be a remote chance that the outcomes of global events could turn out better in the near term, such as the pandemic and the Russia-Ukraine War ceasing, though it is unlikely. Also mentioned in our previous investment article, the economic indicators (namely the Yield Curve and the OECD Composite Leading Indicators) are pointing towards a higher possibility of a recession.

How should we invest in this period of uncertainty?

Regardless of how long this period of inflation will last, or if the economy enters a recession,  the fundamentals of investing do not change – buying assets of great value at reasonable prices. This is where having a clear mental model to invest with the right asset allocation will make a difference. 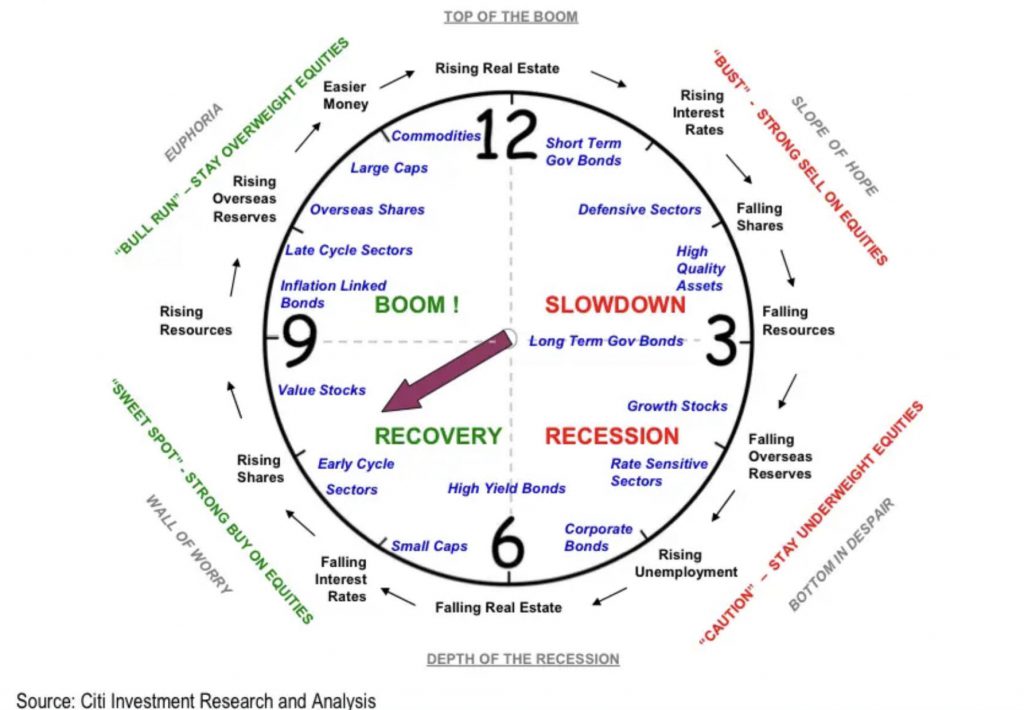 Firstly, in terms of asset allocation, opportunities to invest abound, even in recessions, as there will always be undervalued assets with growth potential in every season. As shown in the figure above, investors can look at high-quality long-term government bonds when interest rate hikes lead to declining bond prices. Similarly, during a recession, investors can benefit from buying structural growth companies and profit from a major correction in prices.

Secondly, in terms of having a winning mental model, investors can benefit by following the value of an asset, rather than the price. For equities, this means looking at fundamentals such as earnings, rather than being swayed by market sentiments. A good example is Google, which had a significant correction in 2020 – a 30% drop. However, an investor could also look at how the company has consistently grown its earnings (its value) in the long term and invested in the firm, the gains in terms of the stock price would be significant, making the 30% drop quite insignificant. The information herein is published by Unicorn Financial Solutions Pte. Limited. (“Unicorn”) and is for information only. This publication is intended for Unicorn and its clients or prospective clients to whom it has been delivered and may not be reproduced or transmitted to any other person without the prior permission of Unicorn. The information and opinions contained in this publication has been obtained from sources believed to be reliable but Unicorn does not make any representation or warranty as to its adequacy, completeness, accuracy or timeliness for any particular purpose. Opinions and estimates are subject to change without notice. Any past performance, projection, forecast or simulation of results is not necessarily indicative of the future or likely performance of any investment. Unicorn accepts no liability whatsoever for any direct indirect or consequential losses or damages arising from or in connection with the use or reliance of this publication or its contents. The information herein is not intended for distribution to, or use by, any person or entity in any jurisdiction or country where such distribution or use would be contrary to law or regulation. If this publication has been distributed by electronic transmission, such as e-mail, then such transmission cannot be guaranteed to be secure or error free as information could be intercepted, corrupted, lost, destroyed, arrive late or incomplete, or contain viruses. Unicorn does not accept liability for any errors or omissions in the contents of this publication, which may arise as a result of electronic transmission. This advertisement has not been reviewed by the Monetary Authority of Singapore.

Don't see what you are looking for ? Get in touch with us now!

Get In Touch With Us

Don’t see what you are looking for ? Get in touch with us now!